I was really honoured to take part in Women Aloud NI’s mass contribution to International Women’s Day 2018. Following on from an energetic and inspiring launch to the annual project initiated by Jane Talbot in 2016,  the 2018 event saw women writers from and living in the North of Ireland come together across the country in a series of literary events.

It was a powerful day with womens’ voices owning the space across the counties. For my part, I was in Coleraine, firstly chairing an event on ‘A Sense of Place’ with the fabulous writers Bernie McGill and Claire Savage. We explored the way in which our writing is influenced, inspired and strengthened by our surroundings, in this case Rathlin Island for Bernie and the north coast of Ireland for Claire. My own writing is creatively inspired by Rathlin, both in my debut novel The Birds That Never Flew which sees two teenage mothers flee to the island in search of emotional and physical sanctuary, and, in my recently finished novel, The Road End, two of my protagonists are in a sense physical manifestations of some of the key characteristics of Rathlin Island.

During the panel discussion Bernie, Claire and I all read sequences from our novels, illustrating a sense of place and the ways in which landscape has influenced our character development. Bernie read excerpts from the incredibly beautiful and powerful The Watch House and Claire from the very clever children’s novel, Magical Masquerade.  There was also some time for a few excellent questions from a really engaged audience. 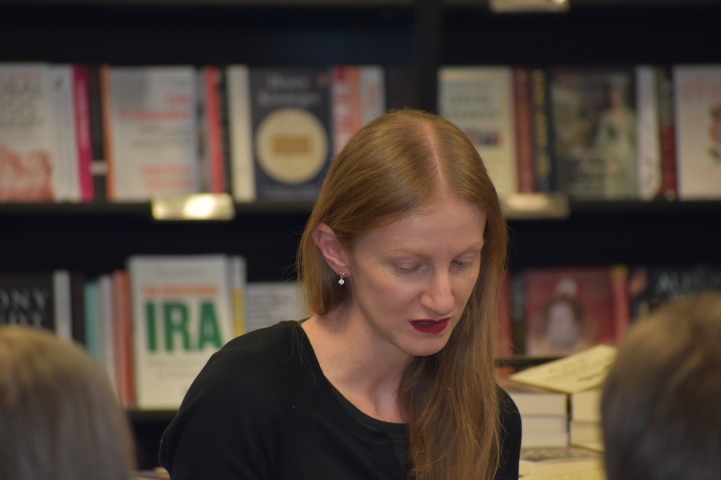 The second part of the day was a readathon, bringing together writers in five-minute slots ranging from novel excerpts, short stories, memoir and poetry. Jane Talbot kicked off the session with a powerful performance which held the room captivated.

There were additional events happening throughout the day and long into the evening and there’s a host of fabulous images and feedback on them all on social media, including the brilliant women who participated in the Coleraine readathon. Have a look using @womenaloudNI and the hashtags #WomenAloudNI #ReadWomen on Twitter. You can also find lots more on yesterday’s events and everything else that is coming up on the Women Aloud NI Facebook page.

Let’s hope we can continue the momentum and encourage one other to use our voices loudly and proudly and believe in one another every single day. Also, let’s read one another’s work. Comment, share, participate. After all, we write for readers.