The swallows are home from their travels, fountain pen tails inking the sky with stories, polished backs glistening like stars falling from the passing night. They are way too quick to allow me to photograph them but they are making their presence felt, swooping low and daringly along the edge of the patio, their new beginning palpable, summer darting tantalisingly on the cusp of a wingbeat.

The geese have also returned, calling out triumphantly as they appear en-masse from the north, flying majestically beyond the farm’s dry stone walls and on to still island waters, its murky depth awaiting the cackling chaos, reeds bowing and creaking as they thread a shimmering welcome home.

The whin is in flower too, its yellow blossom tattooing shadows, nuzzling the darkness beyond the distant hills, its coconut scent chasing the swallows wake, hitching a ride to the shoreline where it surfs the coolest waves, fragrant spray performing for lapwings peewit peewitting on the marshy water edge.

The lane at the house’s edge is moving, its reckless landscape sloping off in every direction, its panorama alive with magic, the fairies beyond the roots of the hawthorn trees pushing boldly into silvery branches, tiny white heads embroidering the unfettered horizon, wings poised and taut, awaiting earthly form and a brief encounter with mortals on Beltane day. 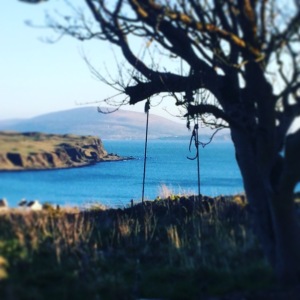 I’m a novelist and award-winning documentary filmmaker. My debut novel, The Birds That Never Flew, was shortlisted for the Dundee International Book Prize in 2012 and longlisted for the Polari First Book Prize 2014. A second edition was published in 2015. I write, produce and direct documentary films and won Royal Television Society Scotland awards in 2015 with 'Jock Stein' and for 'Jim Baxter' in 2016. 'Jimmy Johnstone' was nominated for a bronze Torc for Excellence in 2017. My feature length documentary film 'Tommy Burns won a RTS award in 2019. I made two children who are now making children too. That's the biggest achievement of all. I live in Glasgow, Scotland and Rathlin Island, Ireland. If you want to get in touch you can email me: margot@purpletv.tv. If you'd like me to attend a literature event then please have a look at my Scottish Book Trust profile. View all posts by Margot McCuaig

1 thought on “Pushing beyond the swallows at Maoil na nDreas.”

Things could be worse, I guess.
Sarah Anderson, Maoil na nDreas, Rathlin Island. The former matriarch of my home. I don’t remember Sarah but she and the rest of her family have always been part of my family conversation around island life, the voices once heard, the faces no longer seen but never forgotten, the farm and the old house which is now my home. It’s utterly fascinating being able to see her in colour on what is now my doorstep. I will always protect the roots she so carefully entrenched in the soil. - #islandlife #islandliving #islandsofireland #heritage #history #voicesofthepast #photographsofthepast #legacy #roots #home #homesweethome #Rathlin #RathlinIsland #Mullindress #MichaelJMurphy #reallives #photocollection #archive #photoarchive #MichaelJMurphyCollection
What a wonderful night to celebrate the creativity of women in honour of St Brigid. Thanks to the Consulate General Ireland and the Celtic Media Festival for inviting me to speak alongside the very inspiring Louise Bruton and Catriona Logan with Sara Sheridan in the chair. We spoke about creativity, sisterhood, Celtic identity, role models, the challenges of being a woman in the creative industries, how we need to continue the fight against gender discrimination and much much more in the fabulous Glasgow Women’s Library. A welcome diversion from that other “B” last night! We left the light well and truly on. Happy spring y’all. The fight is on.
‘That’s more than enough work for one day. What about me?’ Cuisle, at this point in the day, every single work at home day. - #irishterrier #irishterriersofinstagram #dogsofinstagram #workingathome #homeoffice #dogneedsattention